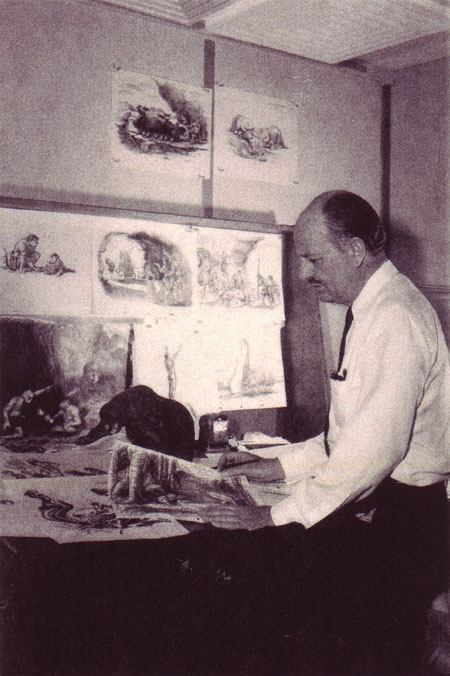 John C. Hench with his drawings

Animation instruction at USC goes back to the Spring of 1933, when Cinema Chair Dr. Boris Morkovin lectured on Walt Disney cartoons and had Walt Disney himself to the campus to meet with students. In 1942 Disney animator and UPA co-founder Les Novros began teaching animation as part of a course entitled Filmic Expressions. Animation then was taught as elective classes of the larger cinema school. Over the years, adjunct instructors at USC included such legends as James Stuart Blackton, Ray Harryhausen, Art Clokey and Art Babbitt.

By the mid 1980s it was time for Animation to have it’s own major.The John C. Hench Division of Animation and Digital Arts was born with several film graphics courses taught by Professor Gene Coe. In 1985, Dr. Richard Weinberg, an accomplished software developer, was brought on board as a joint appointment with the School of Engineering to create the USC computer animation laboratory.

Together, Weinberg and Coe designed the original MFA in Film, Video, and Computer Animation Program. Vibeke Sorensen, the founding director of the CalArts Computer Animation Lab, joined the Division in 1994, and became the first Chair of the newly established Division from 1995-1999 before departing the division in 2004.

In the fall of 1997 and with help from Mr. John C. Hench, the school opened its newly remodeled Animation Studio and welcomed its newest faculty member and artist, Professor Christine Panushka, formerly of CalArts who chaired the division from 1999-2003. In the fall of 1998, two time Academy Award nominee and animator Ishu Patel joined the faculty, as did then visiting artist and Associate Professor and former Chair Kathy Smith.

Today the John C. Hench Division offers a BA and MFA in Animation and Digital Arts, as well as undergraduate Minors and is part of the inter-divisional Media Arts & Practice PhD iMAP.

Click Here for information regarding our Visiting Scholars program.